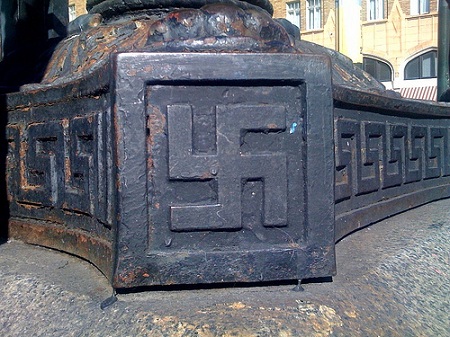 Why are there swastikas on the Old Mint? I saw a sign that the Mint is renovating; will the swastikas be taken off?

Kristin Morris, a curator at the San Francisco Museum and Historical Society (which is in charge of the renovation project), gave me a great answer to this question (which she says is a common one) via email.

"The swastikas are design elements on the base of the lampposts on either side of the building on 5th street. These lampposts also feature a design element known as the 'Greek key' and palm fronds.

All of these design elements were typical of those used in the late 19th century on important buildings of the Classical revival style, of which the Mint is an excellent example.

Many important government, civic, religious and even cultural buildings - notably the major government buildings in Washington DC - were built in this style, meant to recall the temples of ancient Greece and Rome.

In a way, the Old Mint was meant to look like a temple for money. The Classical revival style is usually a bit more spare in design elements. But by the late 19th century, it was very popular to put scrolls, curlicues, and all manner of design components on any kind of building.

The lampposts at the Mint are a good example of this tendency, as are the light fixtures that were inside, which were decorated with six-pointed stars, more Greek keys, scroll work, and more. It was very common for decorative ideas from a variety of cultures and time periods to be mixed in one space or even in one fixture.

Of course, in 1873 when the Mint was being built, the swastikas did not have the negative connotation that they would gain in the later 20th century. The swastika is an ancient symbol known in many cultures and religions and has been found in archaeological finds on almost every continent.

For the Mint, the designer was most likely inspired by the symbol's use in Greek and Roman architecture. It was in fact, perfectly appropriate at the time to use this symbol on this building.

Some of the swastikas were removed from the lampposts by unknown folks many years ago. I cannot speak to the specific design plans for the lampposts in the proposed renovation of the Mint.

I can tell you that since the building is a National Historical Landmark, we (SFMHS - who are undertaking the project, not the city of San Francisco) are required to meet very strict criteria for maintaining as much of the historic integrity of the building as possible. This is especially important where original design elements still exist (i.e. were not destroyed by renovations over the years).

So I would say it is highly likely that IF the lampposts are retained and rehabilitated, or copied, to maintain their historic integrity we would keep all the design elements, including the swastikas."